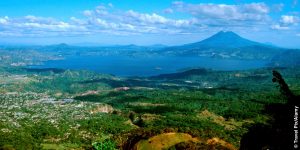 Baillie and I proceeded off the plane a little after sunset. The air was warm and viscous outside recovering from a day of tropical sun.

Now, upon entry into El Salvador it is mandatory to have a pupusa, or ten. Baillie calls them “fat pills” because they’re a masa shell with gooey fatty cheese in the middle. So, our first evening we ate pupusas with Doctor Roberto and his sons Roberto Jr., and Javier.

The next few days were spent doing in-house surgery clinics in San Salvador. With the equipment in Doctor Roberto’s surgery he Doctors Heriberto and Eduardo can get patients on and off the table in 20-30 minutes, which, allows them to help more people with less complications. The procedures in San Salvador were routine, but in Jiquilisco things got a little more interesting. Jiquilisco is a small bay side town where Dr. Heriberto grew up. Eager to give back he wasn’t letting anything stop him.

Eye surgery is a major precisely-completed miracle. These doctors’ hands move with the graceful meticulousness of godliness. Aided by their scrub nurse Margarita these three men are the best in the world. The most touching moment for me always happened at the beginning of surgery with Dr. Roberto. We’ve dilated the patient’s eyes, they’re now on the table, and we are just about to begin prepping the patient when he leans his head down. For a few moments he bows to the patient and they pray together. The room is silent despite everyone working; we all knew something sacred was taking place. The air is laden with prayer for a few moments and then it was time to get to work.

The first day was fine, during the second there were a few minor mishaps, but on the third all the equipment failed. The first microscope was from the 1960’s or 70’s and just shut down, the second was one from China. We spent the rest of the day playing with and cooling the microscope from China. In an ice-cold surgery, we had a fan, a desk lamp, a tool kit, and even a few repairmen in scrubs at one point. Doctor Heriberto, who was operating at the time, kept his hands cemented in place every time the light went out or a repairman made his way in the room. It was a feat unlike anything I have ever seen. Patient after patient had cataracts removed, and new lenses put in. These doctors are first class eye surgeons who give back to their community every year. They know in a developing country ravaged by civil war they’ve been dealt a high hand. Sight Surgery International allows them to help their people, in Heriberto’s case, help the people where he was born and the people who put him through medical school.

According to the 2004 population census, the population of El Salvador increased to 6.3million persons.  In 2005, the average number of cataract surgeries per million inhabitants was 900.

Just helping families recognize
the early warning signs will be a significant step forward here.   Be sure to subscribe to our Twitter feed and Facebook in order to receive updates of our work here.

Our Goal is Two-fold
Examine and treat as many patients as within our time from while assuring that the local staff are prepared for thorough follow-up with the patients as they recover.