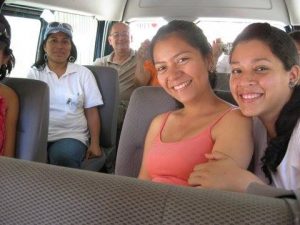 "Our surgical marathon began early in the morning.  After the first few minutes of bustling organization, four tables filled and the surgeries progressed simultaneously.  Patient after patient was led into the OR for anesthesia and surgery.  At first, the visiting surgeons worked as primary surgeons with local surgeons assisting.Soon, as confidence and skill levels increased, the roles reversed.
For the majority of our Vietnamese colleagues this was their first time performing ECCE with IOL implantation under a good coaxial microscope - in other words their first experience with modern, state of the art cataract surgery.

The enjoyment of the local ophthalmologists was obvious.  Many of the cataract patients were young by our standards - in their early thirties - and this posed unexpected and unusual challenges for the visiting team.

Vietnamese OR nurses all function as circulators, not scrubs.  They were fabulous;  one could not imagine a more pleasant, helpful and efficient group.  I alternated between circulating and scrubbing depending on what needed to be done at the moment."

"Post-op rounds again were a fine way to begin the day.  The surgical queue shortened as the day continued.  Patient after patient finished, and we came to the last case of the day,  a difficult and complicated one.  Then "it" happened.  The "it" on a surgical expedition varies;  it could be an anesthetic reaction or a patient stricken with a fit of violent coughing during a particularly delicate moment of surgery.  One has to be prepared for anything.

In this case, "it" was a complete power outage that plunged the OR into darkness just after the lens was delivered.  The surgeon froze as I plucked the penlight out of his pants pocket and headed for the footlockers where our trusty headlights waited.  Much more convenient than flashlights, these lamps have become de rigueur in expedition quartermastering ever since they proved their worth by saving a clinic in the Guyanian jungle a few years ago.  With our illumination secured, the surgery was successfully completed 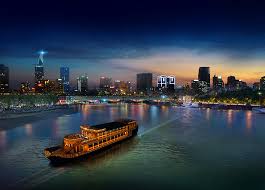 That night Dr. Luy and her staff took us on a dinner cruise on the Saigon River - a glorious end to a rigorous but rewarding day."

Grandpa Sees For the First Time 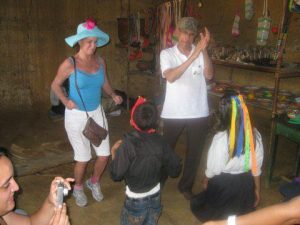 70 year old, Marvin, had had a good life and a wonderful loving family. Then cataracts robbed him of his eyesight and he could no longer play with his grandsons, Hector and William. After an active life, Marvin fell into a depression when he couldn't help with the family chores or play hide and seek with his grandsons. It was as if his whole world was hidden from him and there was no way to find it again.

When he first heard that volunteers from Sight Surgery International were coming to his village he hardly dared hope. In his culture, when your hair turned white, your eyes also turned white and then your world was black. Could these visiting volunteer surgeons really make him see again? What kind of miracle was that?

The SSI team arrived quietly one night and set up in the local clinic's operating room. Marvin wasn't first in line, but he was pretty close.

After a quick examination, he was guided to a row of chairs outside the operating room. Nervous but excited he waited for 3 hours until his turn came. He was led into the operating room where the surgeon gave him the "block" to numb his eyes. He could feel pressure and movement around his eye but no pain. Less than an hour later the surgery was done and his eye was filled with antibiotic ointment and patched.

The next morning he waited along with the others who had had surgery the previous day. A smiling nurse took his patch off and gently washed his eye. The surgeon followed with a tiny flashlight and some questions. Pointing to an eye chart across the room, the surgeon asked which was the smallest line he could see. Marvin couldn't believe it! Not only could he see two lines from the bottom of the chart but he could see all the people in the room!

Marvin jumped out of the chair and out the door to where Hector and William were waiting. "Aha, you little rascals, you thought you could hide from me forever. Not Now Kiddos, we have 2 years of hide and seek to catch up on! 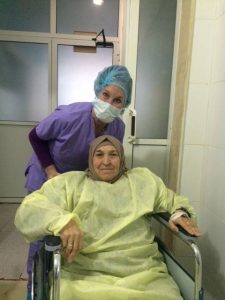 Julia was an 83 year old grandmother who had been blind from cataracts for 6 years. By the time the Sight Surgery International team met her she had despaired of ever seeing her 5 year old granddaughter, Marie.

Of course Julia was frightened of her surgery, but the caring circulating surgical nurse,, reassured her and held her hand. In fact, she never let go of Julia's hand during the entire surgery; softly whispering encouragement and soothing Julia's feelings of fear. Little by little Julia relaxed as the surgeons performed their magic.

The next day the moment of truth arrived. Julia waited nervously with her daughter and son-in law, and of course, little 5 year old Maria.

The nurse gently removed Julia's eye patch and bathed her swollen and tender eye, washing the antibiotic ointment away from yesterday's surgery. With the patch off and the gooey ointment washed away, Julia turned to her family. A smile started with her lips and suffused her entire face and she SAW MARIA FOR THE VERY FIRST TIME. Laughing and sobbing, she cried "Maria, Maria you are even more beautiful than I imagined". This was the moment that we were all waiting for: Julia's prayers were answered and she could now see her precious grandbaby grow up.

Mother Sees Her 2 Year Old for the First Time

Georgina was a 32 year old mother of five. She had slowly gone blind over the last 3 years. Life became more and more difficult for this young mom after the birth of her youngest child, Victor, now two years old. Georgina, tried to be a good mom, but it was hard for her to cook without seeing, clean without vision and could only tell where her kids were by hearing the sets of noises by which she knew individually belonged to each child.

One of the kindergarten teachers at school heard about Georgina from her second oldest daughter and called us. An eye exam by a volunteer ophthalmologist was set up and it turned out that Georgina had a progressive eye disease called kerataconus. She needed a corneal transplant!

Several weeks went by as we made the arrangements to get a donated cornea, donated hospital time, donated anesthesia and a volunteer ophthalmologist that specialized in corneal transplants. When all that was in place I drove Georgina to the hospital for her surgery.

The next day her sister brought her, along with her youngest son, Victor, to her eye doctor . As we took off the patch, Georgina looked around in amazement. She could see the doctor, nurse, office equipment and the clock. I grabbed her hand and said, "Come with me, Victor is waiting." In the waiting room Victor was wiggling in his aunt's lap. "Victor, my baby" Georgina squealed as she saw her two year old son for the first time. There was not a dry eye in the room.