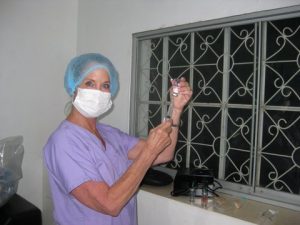 For the past 30 years, Baillie Russell Brown has been waging an all-out war on world blindness, as a technical volunteer with multiple international eye surgery organizations all over the globe, she has organized hundreds of sight-restoring clinics in more than 65 countries.  She's recruited and dispatched international volunteer ophthalmic surgical teams throughout the emerging world, coordinated skills exchange programs to enhance the long-term capacity of foreign ophthalmologists to treat their own blind, and convinced medical equipment and pharmaceutical companies to donate tens of millions of dollars worth of essential supplies.

And on top of all this, Brown, a licensed optician and ophthalmic surgical technician, has personally participated in over 70 clinics over 40 countries, including Zimbabwe, Borneo, Papua New Guinea, Brazil, Guyana, Mongolia and Vietnam.

Brown received her optician's license in 1974 and completed training as an Ophthalmic Surgical Technician in 1986.  She is an associate member of the California Association of Ophthalmology and served as Vice President of American Women of International Understanding for ten years.

She is listed in "Who's Who in Top Executive Management" for 1996, was selected the Soroptomist Woman of Distinction for International Goodwill and Understanding in 1988, named Outstanding Young Woman of America in 1985, and received a Certificate of Recognition from the California State Assembly in 1985.  Brown has also been selected for inclusion in the Marquis "Who's Who in Medicine and Health Care" 1997-2000 editions and "Who's Who Among Outstanding Business Executives."

Brown worked as a licensed optician and as a staff member for Direct Relief International.  She also served as a volunteer for a number of community organizations, such as the Braille Institute and several health fairs.  Her interest in international affairs was evident at an early age;  by the time she was 21 she had traveled around the world by herself.  Her hobbies include scuba diving, long distance running and piano.

Ms. Brown is probably most proud of her success in keeping her global relief operations under tight cost controls. "Thanks to donated surgical supplies and volunteer assistance from ophthalmologists, nurses and technicians, our total annual administrative budget, including fund-raising, constituted less than two percent of the value of surgical, medical and educational services rendered. Our contributors know that their money is extremely well spent and that we are making a significant impact on a solvable world problem."

We can't operate without your tax deductible support.