Douglas Katsev, MD, received his chemistry degree from St Louis University. He attended Emory Medical School before returning to his hometown of St Louis for his ophthalmology residency. He did a corneal/refractive fellowship at UCLA Jules Stein Eye Institute. He has been in private practice since 1990 at the Sansum Clinic of Santa Barbara, CA. He is both the chair of Ophthalmology at Sansum Clinic and Cottage Hospital. He is the lead ophthalmologist in this large group, performing more than 2500 cataract/refractive cases a year. Dr Katsev is an active member of the American Academy of Ophthalmology and the American Society of Cataract and Refractive Surgeons. He is on the editorial board of Cataract & Refractive Surgery Today as well has been a board member of the American College of Eye Surgeons and the Santa Barbara Surgery Center. During private practice he has been active in clinical research with various intraocular lenses and refractive products. He continues to lecture on cataract and refractive surgery at most major meetings and is a consultant for Omeras and Bausch + Lomb, and has been a speaker for Alcon, AMO, Allergan and Shire.

William Peitzke is a UCLA alumnus who is currently a principal in the Santa Barbara office of Cypress Resource Management specializing in the field of Natural Resources. Mr. Peitzke has invented and assisted in the development of a number of intellectual properties and ventures. During his six-year tenure on the Board of Surgical Eye Expeditions (SEE International), the organization tied for first place in Forbes Magazine’s ranking of the 400 most effective US Charities. As President of SSI, William Peitzke provides continuing business and financial acumen for the organization.

Brad Webb is an experienced entrepreneur and investor in the biomedical and biotech industries. After receipt of a PhD in Biochemistry from UC Santa Barbara, Dr. Webb commenced a twenty year career in the ophthalmology surgery products business as an entrepreneur and R & D scientist.In 1990, Dr. Webb founded Vision Biology, and later licensed the company’s revolutionary patented Viscoelastic Surgical Fluid, for use during cataract surgeries, to Alcon Laboratories. Brad is now a Venture Partner with Claremont Creek Ventures, a highly respected Bay Area biomedical venture capital firm. 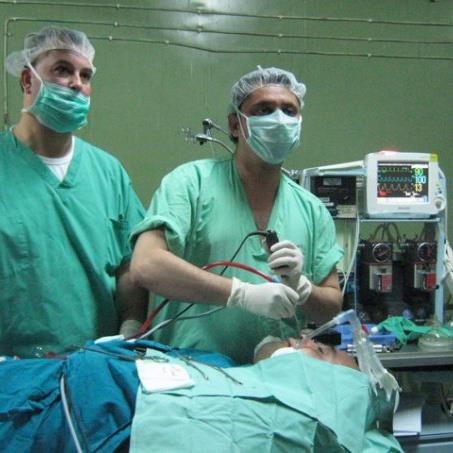 Your donations provide surgical supplies and equipment to local medical professionals and volunteer medical teams throughout the world.